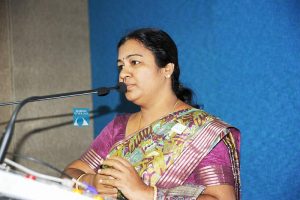 Dr.V. Thulasi Bai has been in the field of teaching and research for the past 28 years. She has been awarded DST-YOUNG SCIENTIST AWARD and project grant of Rs.18,32,000/-by Department of Science and Technology, Govt of India for her project titled, “Development of a Real Time Remote Patient Monitoring and Alerting System”, in the year 2008 which was her Doctoral Research Work.

The November 2007 issue of READERS DIGEST (USA Edition) and December 2007 issue of Indian Edition featured her research work on Telecardiology and cited it as one of “33 GREAT IDEAS FROM AROUND THE WORLD”. Dr.V. Thulasi Bai’s name has been included in the 2009 and 2010 Edition of WHO’S WHO IN THE WORLD which is an International premier of Biographical Data source for notable living individuals from every significant field of endeavor.

She had been associated with IIT- Madras as Principal Project Officer and has worked on  “REMEDI”-A Telemedicine project, under Padma Shri. Dr.Ashok Junjunwala, Professor in IITM and Member of Prime Minister’s Scientific Advisory Committee.

In September 2016 she was Awarded IETE-TECHNOMEDIA AWARD FOR YOUNG WOMEN IN ENGINEERING by IETE, New Delhi for her significant contribution in the field of Electronics and Telecommunication, Computer Science, Information Technology Engineering and related fields for more than 15 years.

She has completed on a project on using ICT for learning disability titled “Development of an Intelligent Diagnostic and Therapeutic Model for Dyslexia” funded by Indian Council for Medical Research for Rs.23 lakhs. She has recently been awarded IEEE Award for Professional Achievement and elevated as Senior Member of IEEE, USA.

She has worked and working on various funded projects sponsored by DST, ICMR,MNRE TNSCST and IEEE and has received grants over 3 crore for research, organizing conferences and workshops. She has authored well over 60 papers in reputed journals/conference proceedings. She is guiding about 12 members towards their PhD and 4 PhD scholars have completed their research under her guidance.